Adelaide 22 June 1910 – The Register and The Advertiser

The proposal to erect a public convenience in Victoria Square has aroused much controversy. …….. The wages for attendants alone will absorb £1,000 a year.

……… One of the most distressing features of the whole affair is the fact that the structure stands practically under the shadow of the handsome bronze statue which has been reared as a memorial to the Empire’s greatest Queen. ………..

Since the matter was adversely commented upon by “The Advertiser” the original framework of the roof has been removed, and it has been decided to erect more costly premises, but however elaborately the building may be finished off the structure, while it remains, represents an infringement of the rights of the people. …………

The front portion of the building will be occupied by a tram-way waiting room, for the convenience of the public. It is to be well lighted and ventilated, and will have a wooden floor and polished kauri seats. Opening off the northern end of the waiting apartment will be the ladies’ attendant’s room, leading to the ladies’ lavatory.

On the southern side will be gentlemen’s lavatories and the attendant’s room, and the western frontage will be occupied by the tramway employées waiting room and lavatories. The ladies’ and gentlemen’s lavatories will have elegant terra cotta tiled floors and opal glass tiled walls, and be replete with the most modern conveniences in white glazed porcelain. They are to be exceptionally well ventilated, and the lighting will be by metallic filament electric lamps, while all interior fittings and woodwork are to be finished in white enamel.

The facility’s opening on 21 December 1910 was reported in The Register the next day.

Australia’s first cars – the Holden and the Thomson phaeton

There was much excitement about the “first car to be made to order in this country”.

Those carefully chosen words were perhaps in recognition of the Thomson motor phaeton in a feature article in The Argus of 2 October 1948,

You could order this booklet (The Hobart Mercury – 7 October 1948) to get the story of the new Australian car. 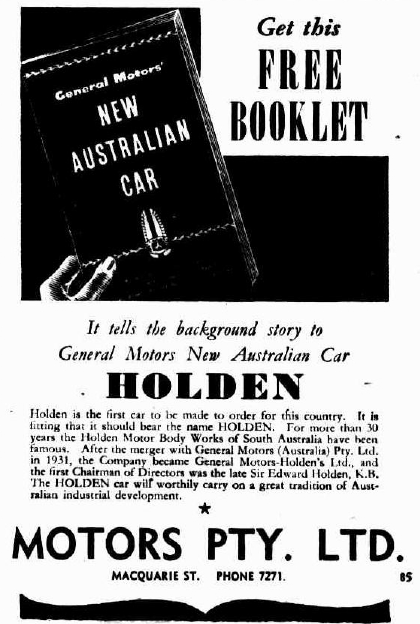 And here it is – courtesy of the Australian Women’s Weekly – 11 June 1949.  A little prettier than the phaeton and weather-proof too.