The first Australian champion of Wimbledon

The first Australian to win the All-England Tennis Championship (aka Wimbledon) was this fellow – Norman Brookes.

The photograph of Norman Brookes, the Victorian representative, published elsewhere was taken on the RMS Moldavia in May last, as Brookes was proceeding to England. Brookes first came into prominence as a lawn tennis player soon after leaving school, and in 1904 was recognised as a coming champion. He has frequently played for Victoria since then and has held the singles and doubles championships of Victoria on some six occasions. In 1905 he played brilliant tennis in England winning the Renshaw Cup at Wimbledon, and only being beaten for the All England Singles Championship by H L Doherty. He represented Australasia in the “Davis” Cup  competition that year, and subsequently when playing for Australasia v England beat H L Doherty. Since his arrival in England this season Brookes won the Northern Singles Championship at Manchester, only losing three games during the event. Brookes has been described as a “sturdy left-hander, and a nimble punishing volleyer, who doesn’t worry about the cut of the court or the equilibrium of his opponent”. 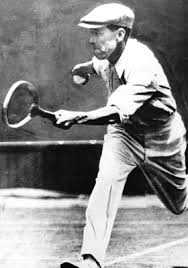