On 13 March 1922, this funeral notice for Steven Polkinghorne appeared in the Charters Towers press. 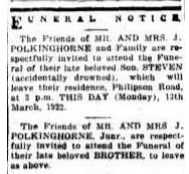 A month later, this respected member of the Towers Concert Band was remembered by his fellow players.

One of these framed photographs is now housed in the Zara Clark Museum in Charters Towers.  It is accompanied by this story.

“At a picnic at the weir, Steve was boating with friends when a lady’s hat was blown into the water. Steve tried to rescue the hat but when he swam back his friends, as a prank, rowed away. It is believed that Steve tired, or had a cramp, and drowned.”

Both articles are from The Northern Miner via Trove Australia – 13 March 1922 and 13 April 1922 respectively.