colonial reporting – padding it out

On 17 February 1805, The Sydney Gazette and New South Wales Advertiser published the paragraph below. Before you read it, imagine the possible scenario.

“Mind how you go on the road from Sydney to Hawkesbury. There’s been a siting of three gents hanging about near the Ponds.  They stopped a cart.  Put together a few words of warning for tomorrow’s edition, will you?”

Take a deep breath and read on.

Punctuation and spelling are as per the original item.

suspicion of their being bushrangers. They had been previously observed lurking about the Ponds by a carrier, who passed unmolested, owing perhaps to his having another man in company : they did not, however, take any thing out of the cart they did stop ; nor at this time has any account been received of their offering violence to either passengers or other persons ; from whence it may be hoped they prefer the prospect of being restored to society to any momentary relief that might be obtained from acts of additional imprudence that could at best but render their condition hopeless. It is nevertheless necessary, that the settler as well as the traveller should be put upon his guard against assault, and that exertion should be general in assisting to apprehend every flagitious character who would thus rush upon a danger from which they can only be extricated by timely contrition and their return to obedience. All that have heretofore devoted themselves to this most horrible state of exile exactly correspond in the narration of vicissitudes to which many have fallen the unhappy victims. How deplorable must be the prospect of terminating an existence under all the accumulated horrors of such an exile! without a friend at hand to administer the last kind offices, or to alleviate affliction by humane condolance! parching with thirst, perhaps, but deprived by famine of the power to quench it! instead of the delightful confidence which Christian resignation can alone inspire, each succeeding pang embittered with self-accusation and remorse, heightened by the surrounding gloom to all the agonies of deep despair. If conscious impropriety of conduct inspire the fatal resolution of flying to the woods, this second act becomes a second outrage, and by an obstinate perseverance the very doors of mercy may be closed, and every avenue to hope cut off.

From The Australian Town and Country Journal of 10 December 1902 comes this item in a special edition of businesses in Balmain, a suburb of Sydney.

My suspicion is that it was a promotional feature which may have involved payment for the placement of what were, in reality, advertisements.

Disclosure:  W J Laws was my great-grandfather who went on to become the Mayor of Balmain in 1907-1908.

The most imposing block of buildings in Balmain, without doubt, is that which comprises the Town Hall and Post Office, situated, as it is, in the centre of the suburb’s main thoroughfare, and upon an eminence which renders it visible from almost any part of the city, and even of the more distant suburbs. Right opposite the Town Hall, and within a yard or two of the tram stopping place, are the premises of Mr. W. J. Laws, auctioneer, valuer, and property agent.

In such a thriving district there is a lot of business requiring the attention of an expert real estate agent, while a lot of property owners have interests which they must of necessity employ someone else to look after. Of this business and these interests a very large proportion are in the hands of Mr. Laws, who has a local standing of very nearly 18 years, during which period he has not only gained a most intimate knowledge of local properties, but has established a reputation for business aptitude and integrity. Some three years ago Mr. Laws took over the business of Messr. J. Garrard and Company.

Since he first started in the business of real estate agency Mr. Laws has probably had the bulk of the property in Balmain in hand, and his acquaintance with local values is, therefore, of such a character that his advice may be regarded as practically infallible. The fact that he has lived in Balmain, too, since he was but a few weeks old is an advantage in a business requiring judgment as to the relative prospect of advancement as between different localities. He is at the present time a member of the borough council, and he has had, too, a wide experience in local municipal valuation. The list of properties passing through Mr. Laws’ hands is such that it is safe to say that anybody, no matter what class of house was required, could be accommodated almost immediately. Once in each month, or at any time, by arrangement, Mr. Laws holds land and property sales at auction. As an adjunct to his business he conducts the local agency of the United Insurance Company.

Three men and a woman standing under the verandah of A. E. Fowler’s News & Cycle Agency c 1920-1935 from the Reginald Wood collection of glass lantern slides in the State Library of Victoria.

This report appeared in The Argus of 16 February 1898 – it may be a hint as to the location of the photograph.  I’m unfamiliar with the landscape of the town of Bright and am hoping someone might recognise the church spire or know some of the history to put us straight.  The catalogue record tags the photograph as Stores retail – Victoria.

sketching the Victorian gold fields in 1902

In 1902, a French artist by the name of Charles Georges Paul Millen de Grandmaison was travelling through Victoria with gold fields in his sights.  An insightful observer, it appears he may also have been one of the gold diggers himself as his watercolour sketching and accompanying text might indicate.  I can find no reference to him elsewhere, other than this fine folio of his work sold by Antipodean Books Maps and Prints and now held by The State Library of Victoria.

It seems it didn’t take long to pick up the lingo as some of his notations demonstrate. 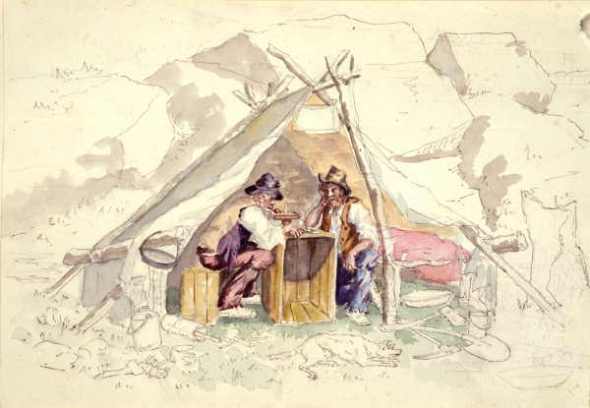 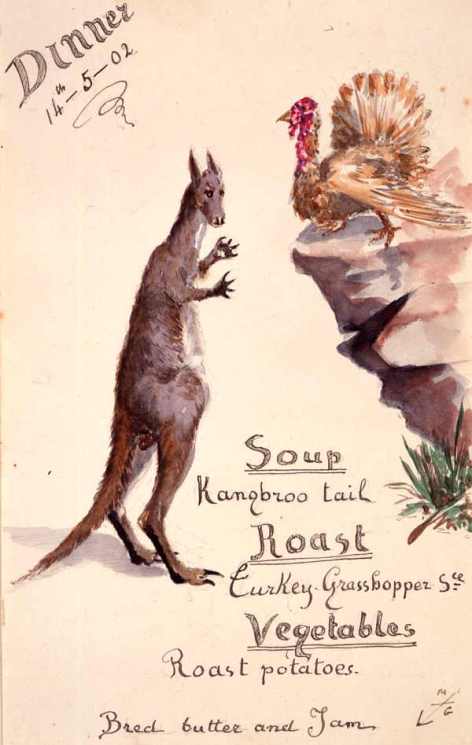 snaps on the street

This street photograph reflects another time when dressing up for a visit to the big smoke was essential. My best guess as to the year this family photo was taken is 1938.  If that’s right, the child (turning 80 in a few weeks time) is 5 years old.  She may have been younger than that, especially if the ticket inspector was working on their train as they travelled from country New South Wales to Sydney.

In April 1941, the Sydney Morning Herald reported on a licensing plan for photographers on city streets.

The City Council will shortly consider proposals for the licensing of street photographers and also a request from the Professional Photographers’ Association of New South Wales that the taking of photographs in Sydney streets be prohibited.  The Town Clerk, Mr Hendy has prepared for the City Council a memorandum setting out the case for each of the opposing interests without making any recommendation to the council.

Mr. Hendy states that street photography first came officially under the notice of the City Council in 1928, and since then has progressed to such an extent that it can now be regarded as unauthorised street trading. In fairness to the operators, he says that little street littering now takes place. This was formerly the main objection, as cards handed to pedestrians were generally flung on to the streets.

Since 1928 there have been 2,272 prosecutions of street photographers for breaches of the City Council regulations. Mr. Hendy says that fines have failed to stop street photography, despite the fact that some offenders have been put in gaol for not paying penalties. [……]

In 1945, Miss Yvonne Terry was still able to work as a street photographer at Circular Quay.  The West Australian – 4 December 1945.

The photographer who snapped my family members on the street was obviously of good character as the picture ended up in the possession of the subjects.  Not so for another as quipped in Column 8 on 2 October 1950. 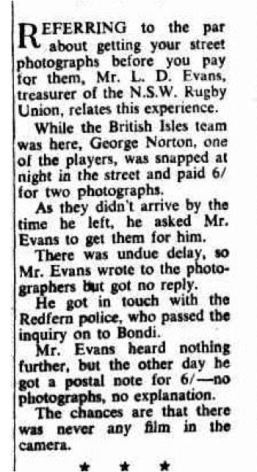 You get the impression that the authors of these job advertisements  did not have their expectations met by previous employees.

Constance Stone had to put in more than a few hard yards to get to be Australia’s first woman medical practitioner.

The Maitland Mercury and Hunter River General Advertiser of 13 February 1890.