Thanks to Project Gutenberg, many out-of-print publications are freely available online.

Edward Lear is mostly known for his nonsense verse, the first of which he published in 1846.  A Book of Nonsense was published when Lear was around 34 years old. It included short limerick verses like this one.

It wasn’t until around 1870, when Lear was approaching the age of 60, that his famous The Owl and the Pussycat appeared in the book, Nonsense Songs.

His earliest work showcased his considerable talent as an artist. Illustrations of the Family of Psittacidae was published in 1832, when Lear was just 20 years old. Forty-two colour plates of parrots are available for perusal via the link above. If you’re interested in some more biographical detail of this 20th child of 21 children, head over here to the Poetry Foundation. 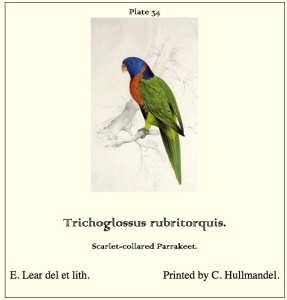 Title: A Book of Nonsense

Australians all – on your feet for this anthem

The Queenslander – 18 October 1890 – printed this music by A McBride to accompany words by the poet James Brunton Stephens as a potential composition of his Australian anthem.  Seems catchy enough.  Yes?

come in spinner – the game of two-up

A rabbit and a bandicoot …… 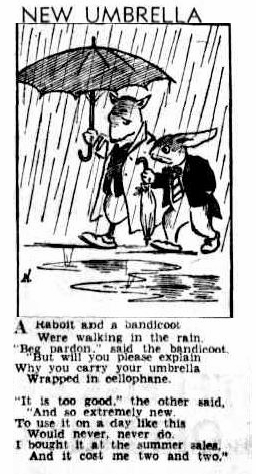 A sweet little verse for the end of the week.

So what’s a bandicoot? – Thanks to the NSW Office of Environment and Heritage for the fact sheet. Bandicoots were named after, but are definitely not equal to, a rat species found in India and Sri Lanka.

It’s good to know that, soon after he arrived back in England, he was ready to spring to the defence of a nation apparently rumoured to be on the track to ruination.  Sydney Morning Herald – 3 March 1904 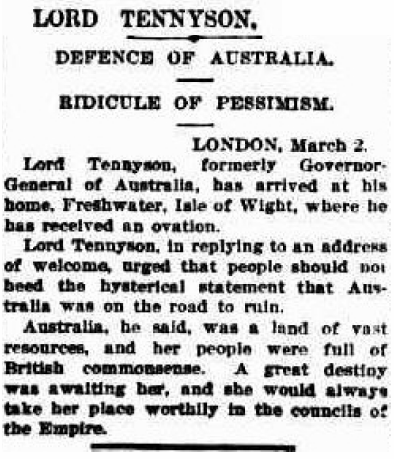 This 1944 Autumn edition of Angry Penguins featured a painting of Sidney Nolan’s on the cover.  (Image from ABC Radio National’s Bookshow where you can also find an audio download about the hoax poems included in the publication).

Angry Penguins was the creation of Max Harris and his editorial committee – John Reed, Sunday Reed and Sidney Nolan.  This edition featured the work of Ern Malley whose work had been introduced to Harris by his ‘sister’ Ethel.  But things weren’t necessarily as they seemed. 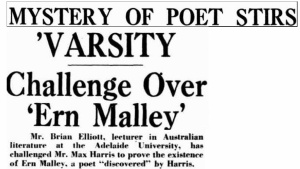 Mr. Brian Elliott, lecturer in Australian literature at the Adelaide University, has challenged Mr. Max Harris to prove the existence of Ern Malley, a poet ‘discovered’ by Harris. (The Max Harris link is to the Professional Historians Association of South Australia)

The mystery of Ern Malley is causing concern in literary circles not only in Adelaide, but through out Australia. The reason is that the poems are good, whoever wrote them. Some of them were included in the anthology of Australian verse collected by the American poet, Harry Roskelenko, and published in New York by Henry Vinnal.

AN alleged life story of Malley, together with all his poems, appears in the latest issue of ‘Angry Penguins.’ published by Reed & Harris.   ………… Harris says:— ‘Recently I was sent two poems from a Miss Ethel Malley, who wrote saying they were found among her brother’s possessions after his death on July 23, 1943. Someone suggested to her that they might be of value, and that she send them to me for an opinion. ‘At this stage I knew nothing about the author at all, but I was immediately impressed that here was a poet of tremendous power working through a disciplined and restrained kind of statement into the deepest wells of human ex perience.’ ………… Adelaide University students who have seen the original of this letter and the original poems say that if it is a hoax it is an elaborately prepared one, as these documents appear to be genuine.

James McAuley and Harold Stewart were the young hoaxers.

The Morning Bulletin – Rockhampton – 4 July 1944 and Adelaide Advertiser of the same date reported on the bogus doctorate awarded to the fictitious poet.

The two cheerful and healthy-minded young graduates of the Sydney University who perpetrated the much-discussed “Ern Malley” hoax, and who thus blew to smithereens the irritating pretensions and incomprehensible philosophy of a school of so-called “modern poetry,” are deserving, perhaps, of some higher distinction than the bogus doctorate conferred upon them by “the Sydney University Oxometrical Society.”   But the authors of the “Ern Malley” documents, who labored so hard to make his pretended “poems” the most arrant gibberish, and whose highest expectations must have been exceeded when a laboriously bad skit on bad verse was hailed as the work of  “a giant of contemporary Australian poetry,” will not wear the trappings, if any, of  “doctors of oxometry,” with an ill grace. The one thing that remains to be thought of, is the invention of a fitting academic award for the poetasters and other literary quidnuncs [a self-important newsmonger and gossip] who took the fictitious “Ern Malley” to their bosoms, swearing that he was a genius after their own hearts, and implying, in the usual way, that all who ventured to pronounce him childish and incomprehensible, would but betray their own pathetic lack of aesthetic taste and spiritual perception. A wooden spoon or a leather medal, might conceivably meet the case.

“…. softer than slumber and sweeter than singing,

the notes of the bell-birds are running and ringing”

Continuing the poetic theme from yesterday, Henry Kendall‘s poem Bell Birds was published in the Sydney Morning Herald on 25 November 1867 two years before the poem was included in Kendall’s Leaves from Australian Forests.