C Arthur Von Tosseau (or Arthur Niven Tossau or Arthur Tozzart and/or other name variations along the way) made his living for a large part of his life traveling around Australia performing as a sketch artist in public places such as the Manly Corso, as well as regional centres across the country as this advertisement from the Maitland Daily Mercury on 26 July 1923 portrays.

These examples of his work on advertising posters can be found in the collection of the State Library of Victoria.

Fat man with Panama hat – Tossau, C. Arthur von & Mason, Firth & McCutcheon (1904) – isn’t clear about the brand of ale it’s advertising although it does look like a good place to be at this time of year.

Magnesium hydroxide (milk of magnesia) never had such an ethereal treatment as with his The Gift of the Gods poster – Tossau, C. Arthur von & Mason, Firth & McCutcheon (1904). A tasteful use of cloud camouflage don’t you think?

There are numerous articles about Mr Tosseau in Trove’s digital collection.  One gets the impression he was quite skilled at self-promotion as he appeared regularly on radio programs and was often available to be interviewed on his arrival in a new town with his show.  He would not have appreciated this publicity in 1923 when he appeared in court after a mishap at one of his shows on the Manly Corso. (Sydney Morning Herald – 2 May 1923)

At the age of 54, while traveling with his Poster King show, Arthur Tosseau died at the wheel of his car. This account is from The Gundagai Independent and Pastoral, Agricultural and Mining Advocate of 9 May 1927.

His story can be found in more detail on this link to Manly Library’s Local History blog. The photograph of Tosseau is also from that site.

Check out the language in this 17 August 1930 Sunday Mail item.

“Ironing is quite pleasant work”.

“These labour-saving hints will be welcome to many little housewives“

But we’ve come a long way haven’t we.  Fast forward 80 years or so.

The promotion included this:

“Give the wife, girlfriend or partner a rest tomorrow night, because the Carlton Draught girls will be in to do your laundry (well your ironing anyway)”.

There are no words fit to print.

This pumice bar ‘soap’ was developed in 1915 to remove work based stains from your hands.  It is still available today.

“Mum takes the worry out of being close”

The spread based on brewer’s yeast was created in 1922.  Here are some sample advertisements for Vegemite across four decades.  In the 1950s and 60s, magazine and newspaper advertising went personal with children being featured as Happy Little Vegemites.  Go here for everything you wanted to know about Vegemite and its history.

Even the prisoners liked Aeroplane Jelly

Musical items performed by prisoners in Goulburn Gaol (Jail) were broadcast as an experiment in October 1938 (The Mail).

In 1952, commercial networks had taken up the broadcasts and Aeroplane Jelly was the sponsor. 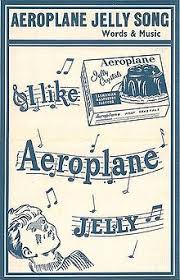 On deodorants and superfluous hair

The Women’s Department of The Queenslander – 6 December 1919 attracted advertisements that could have dented the self-esteem of any modern woman.  With the exception of a request from the Mitchell Library for the diaries of soldiers returned from World War I, the page is full of products designed to remedy the short-comings of being overweight, having superfluous or grey hair, hysteria, excessive perspiration, lice, ringworm and any number of undefined ‘female’ maladies.