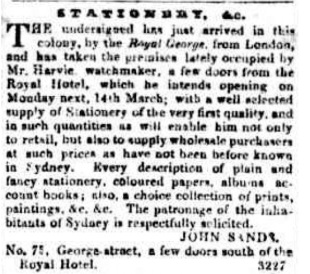 John Sands was a young man when he arrived in the colony with a level of ambition that matched the volume of stationery he brought with him to set up an engraving and stationery business.  Here’s a chronology of the business and how it developed and changed from the 1830s to now.

The Australian Dictionary of Biography provides details of his life and refers to the production of the first Australian themed Christmas cards by the company.

In 1881 the Sydney firm, known as John Sands Ltd, offered one of the first groups of Christmas and New Year cards in Australia: the first card, at a price of 1s. 3d., was listed as ‘Little girl offering a Christmas pudding to Swagsman’.

The Canberra Times ran a lengthy feature article on the history of Christmas cards in December 1975.  Some of the lithographs produced by John Sands are in the Pictures collection of the National Library of Australia.

The man, John Sands, who died in 1873 did not live to see the creation of either the greeting card or the games segments of his business.

The National Archives of Australia holds objects in its collection as well as records.  Pop over here for the story of Games We Played, an exhibition curated last decade.

In 1986, Manly Art Gallery and Museum curated Race to the finish: an exhibition of Australian children’s board games from colonial times to the present day.  The book of the exhibition by Robert Holden is available in various reference libraries.

In 1915, the National Games Company was advertising for agents to sell a ‘great indoor war game’ called Bound for Berlin. War games were particularly popular with another, Dugouts and Trenches, referenced in the article below.

Games that make dull hours pass away. Lots of fun and laughter. Marshall’s have an unusually large variety of Fascinating Games that promise heaps of enjoyment to both old and young. * From this extensive selection we quote:

** HT to boardgamegeek.com for links to Peter Coddle and Halma.

In 2007, Monash University Library purchased a commercial traveller’s sample book of games produced by the National Games Company.  The image (found here) gives a great feel for the style and colours in the product set.

Christopher George King was the designer and manufacturer of the games made by the National Games Company.  There are few references to him in the newspapers of the time or elsewhere. He is listed in electoral rolls as a manufacturer living in Melbourne in the early part of last century. He was born in England, and died at the age of 63 in 1928.