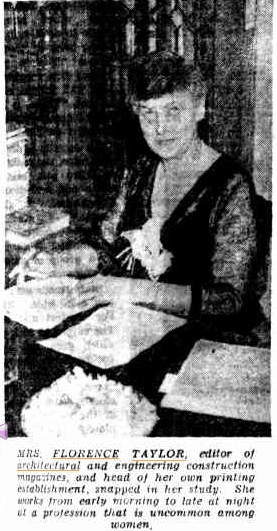 By all accounts, Florence Taylor (1879-1969) was an achiever.  These articles provide a glimpse of the pioneer female architect and civil engineer, “an inveterate founder and joiner” and a bit of a workaholic it seems.  The Canberra suburb of Taylor was named in her honour.

SAYS a writer in a NSW paper:- In increasing numbers women are taking up work which by custom and consent has long been regarded as the prerogative of the other sex. Among the newcomers are architects; not so numerous so far as to cause any consternation in the camp of their rivals, but quite able to hold their own when it comes to the drawing board. “Men make houses but women make homes,” quoted Mrs Florence Taylor, the first woman architect of Sydney. “That is an old sentiment isn’t it but we beg now to alter or amend it slightly by adding and houses too if they have the mind to. I’ve had the mind to plan and to build houses since I was a mere girl, and I achieved my ambition eventually, as you see. But it was hard, close work and has taken me 23 years to learn what I know now, and I am still a student and must always remain that right to the end. Before my marriage I was chief draftsman to Burcham Clamp and afterwards I continued and my tally so far as residences are concerned amounts to 50, mostly in Mosman, Neutral Bay and Darling Point.”

Mrs Taylor analysing her profession says that 80 per cent is domestic architecture, and there is a good deal of confusion over the term. It is more than merely planning one room behind or beside another. The planning is a small factor in comparison. One has to be a worker of parts. Essentials are a working knowledge of the relative value of materials and their resistance to stress and strain; a study of history embodying Grecian methods used with beams and posts and how Romans blended the arch with Grecian construction. Gothic architecture an other school, employed small materials which gave increased elasticity and their craft was more nearly engineering than architecture, but we have to know it.

“One of the sorest trials of my profession is to see capable men discounted on their work. My argument is that a client always gets what he pays for and invariably he begins by tying the hands of the person to whom he entrusts the construction of a building. A £2,000 house for £1,000 is something the cleverest architect can not manage, but we are often expected to achieve that, for never yet was there a client who was content to leave it to the expert. It has always been the same. A free hand seems to be the unattainable dream of the average architect”.

Mrs Taylor discounts the theory so often advanced that women, given the qualifications, are better able to plan livable houses of ideal construction. We can do no better than men. We have no better qualifications than they – all things being equal, we turn out the same kind of jobs. The accredited sex sense does not exist. I pay great attention to the social side and its aid in this profession for women. The academic, by itself is not enough! I go further, and say that it is indispensable that a woman who takes up this work should be in the throng as far as possible. She should keep in touch with the march of people and events, and from both take every thing that will help her to keep her mind and ideals progressive “

The door was opened slightly for Taylor when the Institute of Architects granted an ‘associate membership’ to her.  Northern Star – 14 October 1920

It wasn’t to take her long to crash through.  In the meantime, she continued to demonstrate her consummate networking skills. In 1922, Taylor was elected Vice-President of the Town Planning Association.  Sydney Morning Herald

On the 18 August 1923 the Adelaide Mail reported that Florence Taylor was to become a full and equal member of the Institute of Architects. 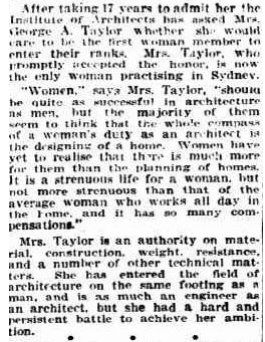 Another visionary, Florence Mary Taylor (1880-1969), Australia’s first female architect, epitomised female foresight and insight. Florence was 19 when her father’s death forced her to become a breadwinner. With no training — and a hatred of domestic work — she got herself a clerical job in a Parramatta architect’s office.

That architect, Edward Skelton Garton, did not share the male prejudice against women entering his field. He gave her a chance to be articled. Within eight years Florence had finished articles — notching up certificates for 19 subjects. Later, she qualified as Australia’s first civic and structural engineer.

In 1907, Florence married fellow architect George Augustine Taylor, a personality in his own right. George, a pioneer aviator, engineer, surveyor, geologist, astronomer, poet, and artist, and Florence made a formidable team.

They married in St Stephen’s Church, Macquarie Street, Sydney, with two witnesses — who were also their wedding guests. The reception was a cup of tea for bride and groom at a now defunct ABC chain cafe. Thanks to George’s help, Florence made the first Australian glider flight ever attempted by a woman in 1909, taking off from Narrabeen sandhills.

A strong woman who welcomed change, she caused a stir as a young apprentice by introducing a typewriter into her office. Generous to a fault, lover of music (possessing a beautiful soprano voice herself), she often paid tutorship fees for people she considered talented. Founder of the Sydney Arts Club, she in fact studied singing for many years, was famous for her music soirees where anybody who was somebody dropped by, Nellie Melba, for one.

An inveterate founder and joiner, Florence resigned from 38 committees, leagues, associations, and the like when she found she had to take life easy in the 1960s. That left a “handful ” of 24 bodies (mostly charity and cultural) she doggedly still attended. Always a revolutionary thinker-doer, Florence foresaw: tunnels under Kings Cross: a second Harbor Bridge. She also wanted a Civic Square, 50 years ago. If that had been done Sydney would have had a large parkland square between Wynyard Street and Martin Place. When Florence put up the idea, the area did not have one large building. As for her other plans, they were intended for a city worried about the alarming congestion of horse and buggy!

George died in 1928, and Florence kept up his work of publishing journals for master builders and engineers from a tiny office in Loftus Street, Sydney, until she was 80. Interviewed for that birthday, appearing under one of her eye-blinking frivolous hats, soft feminine dress, and lashings of perfume, she announced: “I can’t cook and I can’t sew. I can do eggs two ways —hard and soft. And I’ve got more safety-pins holding my clothes together than Woolworths would sell in a week.”

She died quietly aged 89, at her Potts Point home in 1969, leaving a sister sole beneficiary to her $226,281 will. Florence Taylor and her fellow famous female Australians in all their strivings, never heeded another’s advice. Mused the early English novelist Jane Austen (tongue firmly in cheek): “A woman, especially if she has the misfortune of knowing anything, should conceal it as well as she can.” 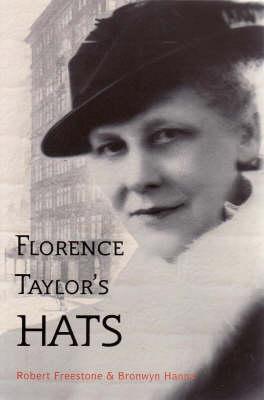 More details of this amazing mover and shaker can be found at the Australian Women’s History forum and in this article by Bronwyn Hanna in the Dictionary of Sydney.  Bronwyn Hanna also co-authored Florence Taylor’s Hats with Robert Freestone. (Image via Booktopia).