The hand coloured glass lantern slide below is an advertisement for Pat Hanna’s fishing reel which includes instructions for its use. Its companion slide (both are c 1924) is from the same Hanna Collection at the State Library of Victoria.

Pat Hanna was a variety stage and film entertainer as well as a keen fisherman and inventor.  In the 1920s, he was touring Australia with his troupe The Diggers.  Cairns Post – 23 July 1925.

The photograph is from The Courier Mail of 27 February 1934.

Head over here for more about Pat Hanna’s life as a performer from the Australian Variety Theatre Archive site.

In 1924 the Reilly Advertising Company created a series of images – seen here in lantern slide form – to promote Bryant and May’s, match manufacturers, as a model factory.  The factory began its life in 1909 as reported in the Sydney Morning Herald of 24 February.

From the collection of the State Library of Victoria, all of the slide images are out of copyright.  C M Abbot is the accredited slide maker.

The On My Doorstep website provides some background to the philosophy behind the running of the Melbourne factory (now a heritage building).

The former Bryant and May Industrial Complex is of historical significance as a rare surviving example of model factory conditions and amenities. The complex was run as a model factory and reflected the Quaker principles of the original English founders. Evidence of the amenities provided for its workers such as the tennis courts and dining room is still substantial. One of the first industrial nurses in Australia was employed at the factory from 1922. 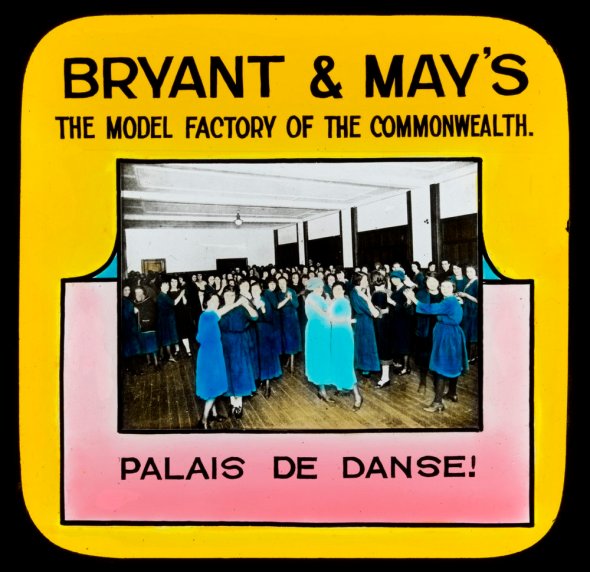