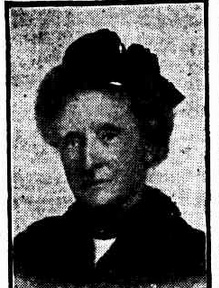 The Sydney Morning Herald of 16 September 1921 published an obituary of Mrs William Curnow (Matilda Susanna Curnow – nee Weiss).  Read more of the obituary here.  A letter of appreciation of her contribution to the establishment of the Women’s Literary Society was published in the same edition. 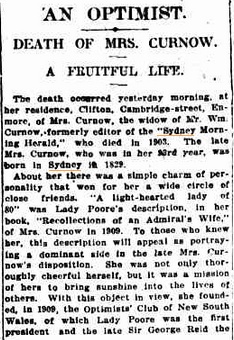 There is a mention of Matilda Curnow in the Australian Dictionary of Biography in the post about her newspaper journalist and editor husband William Curnow.

MrsCurnow, with Maybanke Anderson and Louisa Macdonald, helped to establish free kindergartens and was a founder of the Women’s Literary Society and of the Women’s College, University of Sydney. Lady Poore in her Recollections of an Admiral’s Wife (London, 1915) described her as ‘a light-hearted and intelligent lady of eighty’—in 1909 she founded the Optimists’ Club of New South Wales with Lady Poore as president and Sir George Reid as patron. She died aged 92 on 15 September 1921.

Here are two items from the Sydney Morning Herald from 1 May and 5 May 1909 at the time of the formation of The Optimists’ Club. 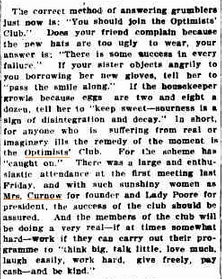