The billy-goat cart, shortened to billy cart, was one of Australia’s favourite make-yourself-amusements.  Sydney’s Powerhouse Museum has a billycart in its collection and a comprehensive historical background is available in the object’s Statement of Significance.  A couple of articles from the 1930s appear below.  I can’t help feeling less than warm towards the ‘socially important resident’ whose influence on Parliament might put a stop to some fun in the streets of Elizabeth Bay.  Australian Women’s Weekly – 10 February 1934.  I love that the police were foiled from solving billy cart crime because the kids weren’t moving the stolen goods on.  Sydney Morning Herald – 26 May 1932

Unfortunately though, many newspaper reports about billy carts are of injuries and fatalities that occurred as a result of collisions with motor vehicles or falls off fast moving carts. 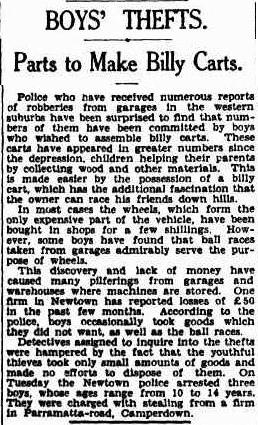 Taking the housework with you on holidays

Caravan traveling as a recreational pursuit in Australia is documented in this post from the Powerhouse Museum in Sydney.

The Australian Women’s Weekly – 1 May 1937 – do you think that’s a special holiday apron?